Showing posts from October, 2009
Show all

October 31, 2009
since i'm a morbidly funny mood nowadays and "death" seems to be the flavor of the month, i am posting bebang's letter to her family.

I Want You To Burn! Burn for Me Baby!

when i die, i want to be cremated. seeing dad lying there made me think that he never imagined he'd wear makeup someday. and pink lipstick.

oh yes, he had the occasional lipstick on his cheek, neck and other whereabouts, but the pink glossy one he had was just awful. it made him look dead (pun intended)

and for those that come up and say "tito carding looks really handsome", thank you. despite the fact that you know, i know and we all know that it was just a knee jerk reaction seeing pops in makeup.

my cousin is going to kill me. you see, she's an angel of death. este, agent of death. she works for st. peter (no, not the saint in heaven with the cock, err... that didn't sound right) and you should have seen her work the crowd of mostly aging-near-croaking visitor…
7 comments
Read more 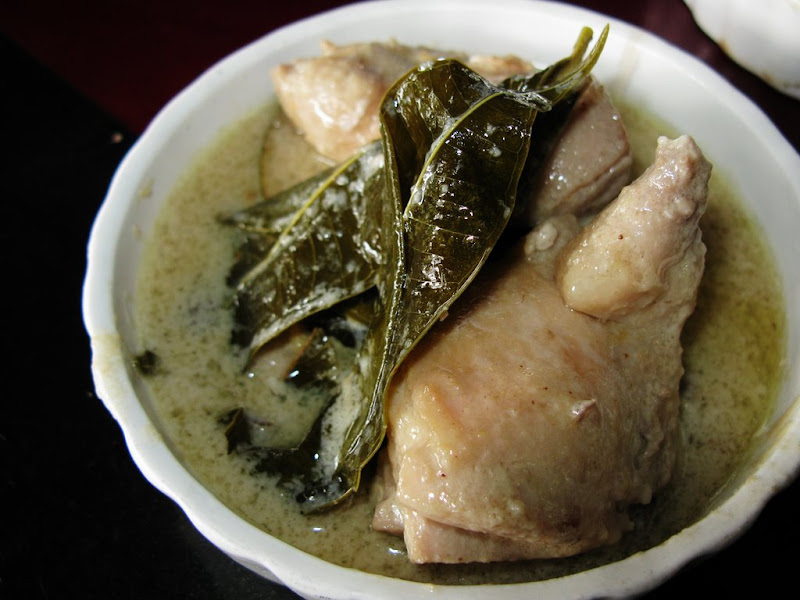 during the last few days of the wake i've taken the habit of eating outside the house. you see, i was "rebelling" against the idea that we've practically made the whole meal thing into something close to a fiesta of sorts.

ginataan adobo na manok
unfortunately, when you're in kabankalan there's not much restaurant options.

melting pot is better known for its batchoy and pancit molo and i have fond memories of the place when i was young and papang would drive over to melting pot to meet with his friends.

the kids (aka me) usually end up running around and ordering siopao and batchoy. 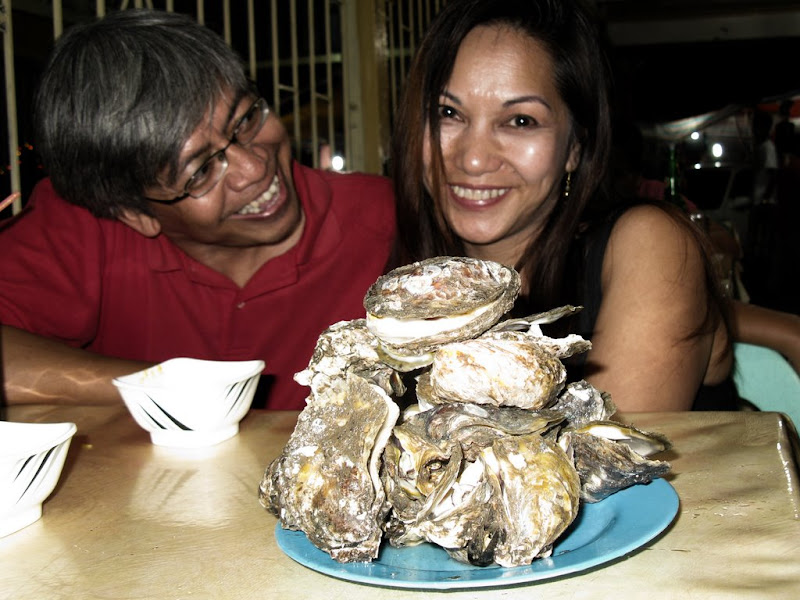 i had some errands to do in bacolod last monday (october 12) and i met up with a couple of friends who were hosting me for the evening. i didn't realize that when they offered to have me in their home it meant they are going to camp out in the sala and me have their bedroom instead. call that filipino hospitality.

incidentally, we had dinner in manokan sa bacolod and lito ordered oysters aside from the usual inasal na manok (grilled chicken). i swear he had this uh, interesting grin on his face when he ordered the oysters. on the other hand, inday had this scared wide-eyed-about-to-be-devoured look in her eyes. hmmmm.

if you find yourself in bacolod, head off to the reclamation area near SM and look for Manokan sa Bacolod. It's an old landmark where rows of stalls offering practically the same inasal na manok vie for patrons. i remembered the place to be a bit more crowded but majority of the stalls had empty tables.

October 15, 2009
since i was tasked to deliver the eulogy after dad's grand kid and brother, i decided to spice up the moment with a few well placed jokes. my voice cracked and i had to stop a number of times, but i was encouraged by the sound of laughter mixed with sobs.

my sister asked me to read her letter to papang, she felt scared she'd break down in the middle of her love letter. i suspect the real reason is that she won't be able to reach the podium becuase of her height.

most people don't know me in town. i left at a very young age, studied in bacolod and manila, left the country and settled in cebu. i stood in front of them without really knowing what to say or how to introduce myself.

considering dad's reputation as something of a ladies' man, i told everyone: many people ask who i am when they come visit the house, i tell them that i am the youngest of seven. hopefully.

turning towards my eldest half brother, i told the crowd: manong cesar is the eldest of the siblings.…
Post a Comment
Read more

October 11, 2009
the news that some of our relatives were coming in from iloilo had my sister scrambling to tell my brother to prepare for lunch. and it's not just an ordinary spread.

the night before, we had pata asado, pata hamonado, palabok overload, kinilaw and pancit canton that had more meats and ingredients compared to actual noodles. food that's going to keep one young, you see, you die early with that kind of fare.

to top it off, even my cousin who lives across the road reminded us to prepare for the visitors.

what the effing shit is that?

hearing them you would have thought we were preparing for some fiesta. my dad's gone the way of the dinosaur. extinct. kaput. dead. i didn't think it was right to make that as an excuse to do a feeding program for the horde!

click on read.more my brother complained that his budget is not going to reach an additional five days with the kind of food that's being served.

i looked him straight in the eye and said, so stop cooking like you're d…
5 comments
Read more

but what do you do when someone greets you HAPPY CONDOLENCE?

i could hear dad's halakhak in heaven.

kilala mo pa ko? (do you remember me?)

let's put it this way, if i have a hard time remembering the names of my co-workers who i practically see 24 hours, seven days a week, would i even remember a long lost relative who could have stayed lost and it still wouldn't have mattered?

there's this really awkward moment in between the question and me looking them in the eye with a blank stare and i utter the word:

i wait a little bit longer and they start to squirm before they mutter their names before heading inside.

i mean, how do i answer that particular question, i think they meant to ask how i am.

over dinner, me, tito baby, melanie, irene (and some other distant relative that i couldn't remember) were tal…
2 comments
Read more

i read this message early morning. if we're to follow the melodramatic movie method of receiving this kind of message then i'm supposed to be in hysterics.

i felt relieved. which is weird, i just got a message that my dad passed away. it wasn't a surprise. in fact, we were expecting it. the other day, i got a call from my brother informing me that dad was really critical and doctors mentioned he might have 48 hours. he called around 10:00AM, my dad died 14 hours after. doctors suck at fortune telling.

so i'm here in the airport, getting ready for my flight at five pm. the only flight available as i scrambled to book myself a seat. then again there's really no point at this stage to rush. it's not as if they're going to have him lie in the ICU hooked up to all sorts of contraptions, resucitating my dad until i get the chance to catch him breath his last.

if there's any consolation, the next time i see him he&…
2 comments
Read more 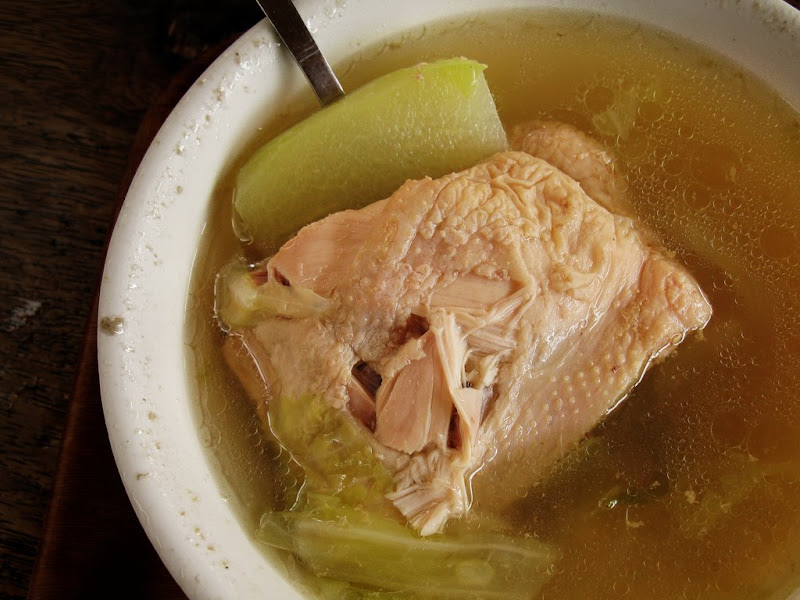 i got up from bed at 10, took a hurried shower, rushed off to church at 1045 and settled in for a carwash at 12 noon. ron wanted to eat in offroads but i really don't feel up to having the same fare of longganisa or chorizo with garlic rice an fried egg. i wanted something more substantial rather than processed meat, fried and murdered in the frying pan.

across offroads there's a sideroad (as opposed to sidewalk) eatery that's gaining popularity with the sykes call center crowd due to its affordable (and tasty) food selection. then again, sykes people don't have much choices in their building. the car fumes couldn't be worse compared to the army of darkness that huff and puff cigarettes in call centers.

so on a cloudy sunday, i present to you my lunch!
Tinola nga Manok (chicken in clear ginger broth) - remind me not to slurp on hot hot soup on a hot hot day.

Ginisa na Talong (stir Fried Eggplant in garlic and soy sauce), a bit too salty for my taste.