Showing posts from July, 2010
Show all

A Taste of Siam 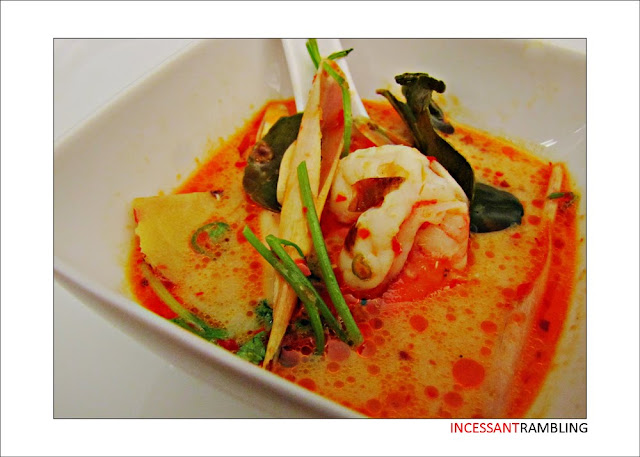 the last time i went to siam was sometime in 2002 and the gastronomic memories still have me smacking my lips and an almost impulsive desire to drink cold water, lots of it.

thai cuisine is sophisticated enough to compete with world cuisine as proven by the range of sauces, spices and herbs utilized in cooking. basil, coriander, cilantro, chili and curries, ginger, garlic and kafir lime leaves, lemon grass, fish sauce and a very generous use of coconut milk are usual components of traditional thai dishes.

interestingly, chili and curries form most of the flavor base and comes in three variants that depends on the desired strength: green, yellow and red curry. more often than not, coconut milk is also used to temper the otherwise biting flavor of the curry. on the other hand, for people that are not used to consuming copious amount of spice, you often find yourself asking for water and more water to try and cool your overheated tastebuds. 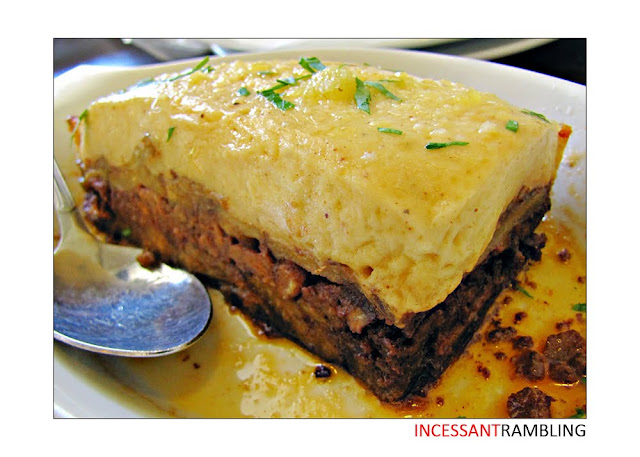 understandably, there's a bit of skepticism when cyma describes the moussaka as the greek national dish. arguably, it is the most recognized of all greek dishes according to most food websites.

on the other hand, the common filipino would typically associate greek food with hummus, tahini, pita and gyros. blame it on the invasion of the shawarma and mediterranean restaurants, but the list is also common in mideastern, south indian, persian regions.

i'm guilty of the same perception as my standard order in cyma would always be the chicken or lamb gyro and some seafood dish. i've had other greek dishes but i've never really ordered the moussaka.

i guess there was that conscious urge to choose something different in the menu - the desire to add to my picture gallery was another motivation. that and the fact that the price range is a bit... hmmm, pricey.

moussaka reminded me of lasagna that used layers of a binding base, tomato based meat sauce and cheese. moussaka used seas…
4 comments
Read more

a no brainer nosebleed 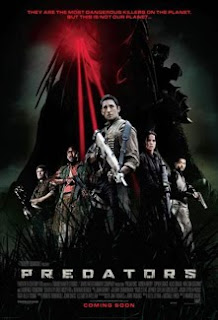 the new predator(s) movie is as racist as it gets.

the list of characters read like the worst sort of stereotypes: (1) a mexican drug cartel henchman, (2) a west african sierra leone RUF death squad officer, (3) a member of the russian spetsnaz, (4) a white trash rapist in deathrow, (5) a japanese samurai wielding yakuza, (6) a psychotic doctor who moonlights as a serial killer, (7) a brazilian black ops sniper and (8) and an american soldier turned mercenary.

except for the russian and brazilian grunts, everyone else seem to be engaged in illegal or subversive activities.

the premise is simple enough, human "predators" are abducted by dreadlocked aliens, released in an alien planet where the humans (and other captured aliens) become the prey.

if anyone watched the original predator movie (Predator, 1987, Arnold Schwarzenegger) then you know that it is just a matter of time before everyone gets stabbed, beheaded, blownup, chopped, diced and thrown in the blender for good m…
3 comments
Read more

Maria Ressa: "We are not an Aquino station"

July 04, 2010
ABS-CBN's Maria Ressa maintained that the station's News and Current Affairs department is not biased, much less an "Aquino station". - quoted from Manila Bulletin, July 4, 2010

yes, it is true, the News and Current Affairs department is not biased as it is now called the Showbiz and Entertainment department.

Who says it is an "Aquino station"? ask the nephews, nieces, uncles, aunts, sisters, drivers, maids and anyone remotely associated with P-Noy that has been featured in ANC, ABS-CBN, SSN for interviews. They all maintain, that it is not an Aquino station.

Kris advised not to marry in church

July 04, 2010
an article posted in manila bulletin indicated that Former Lingayen-Dagupan Archbishop Cruz advised Kris Aquino not to get married in church due to her "personality".  why is it even news material? more importantly, why did that conversation / interview even take place? it reeks of self righteous propaganda from someone whose moral authority is in question. sensationalism? more like tabloid fodder for me.

for your entertainment, here are actual "quotes" from Cruz:

“It will be hard for Kris, in her personality context, to enter into a valid church marriage. The way I see her, seeing her from her past relationships, [she] will find it hard to be a partner, to be a real partner of another, which is the essence of marriage,” - father, who asked for your opinion? why even talk about this one? and since you mentioned "valid church marriage" is there such a thing as an "invalid" one?