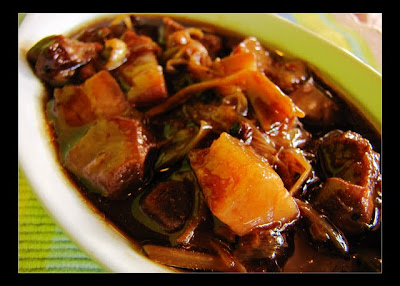 u-huh another pilipino restaurant. in a city where every nook and corner feature the gamut of low to high end filipino restaurants, another new pinoy place doesn't necessarily make me go oooh and aaah. 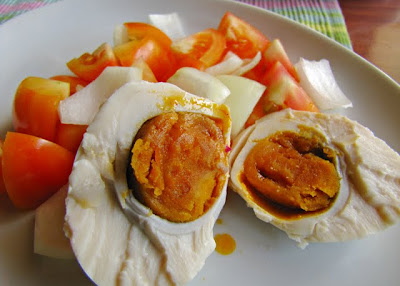 what piqued my interest was the enthusiastic response i got from friends when I mentioned "Mama Gie". specifically, people who studied in Velez circa late 60s up to the late 80s. coincidentally, these people are established professionals in the medical field and to hear them reminisce about mama gie as the place where they hanged out for snacks and meals left me wanting to know more about mama gie. 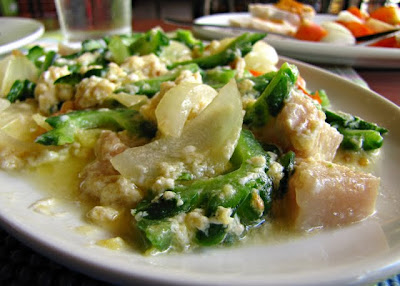 the set up then was simple enough, people sat on a long counter set with stools and food is served through a serving window that connects directly to the kitchen. nowadays, it occupies the space left by Big Bucks cafe in Bigfoot along F. Ramos St. and operates as a full service restaurant. 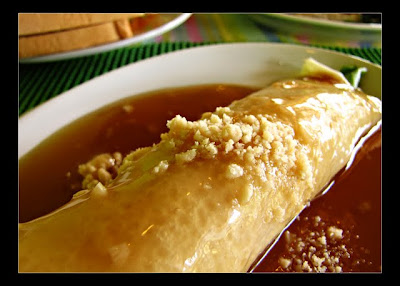 as far as their story goes, Mama Gie became popular as the place that introduced pancit palabok to the cebuano market. i would opine that the jollibee version is tastier but it is easily outclassed by mama gie's version in the sheer number of ingredients included as well as the generous portion set at a very affordable rate. it would be difficult to set your reputation on a singe dish and this is where mama gie steps up to offer other delicious options. the place touts their selection as kapampangan though at first glance it seemed to offer the standard fare of tocino, kare kare, lechon kawali, callos, sizzling boneless bangus, kilayin, dinuguan, beef steak etc etc. 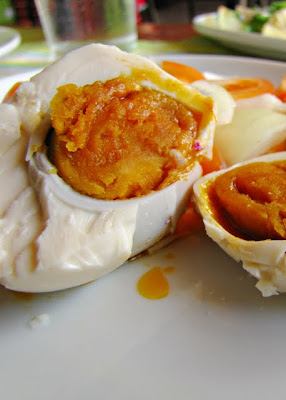 a little research showed that there's a strong indication that all the dishes mentioned above (with the exception of callos, beef steak and bangus) do come from the kapampanggan region although they have long since been adopted by the other regions. a fact that is not surprising as kapampanggan is considered to be the most mature cuisine in the philippines.

for people wanting to visit mama gie, what i would really recommend though is to sample the vegetable selections such as the fresh and fried vegetable lumpia, the exquisite pinakbet and sarciadong ampalaya. surprisingly, these top my list of favorites instead of the usual suspects. 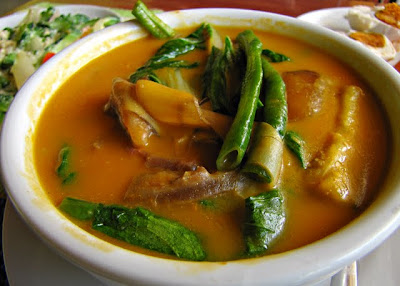 personally, i wasn't so thrilled with the kare kare as it didn't have any actual meat but had more of the glutinous pork skin from the pata / leg portion. the vegetables were fresh though the sweet peanut butter didn't sit too well with me. 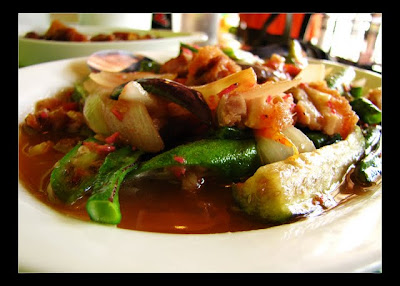 aside from that, the other dishes were reasonably good though i would say that the standouts would be the pinakbet and sarciadong ampalaya. 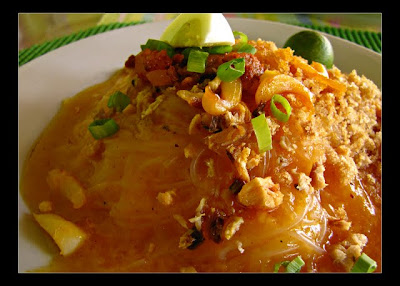 oh, and don't forget the pancit palabok that is worth every single rave from my doctor friends.

i still have a long way to go in terms of going through the menu, i'll post new pictures and individual dish reviews as they come. hopefully, this new reincarnation will inspire a number of loyal patrons who will pass on their memories to the future generation of diners. 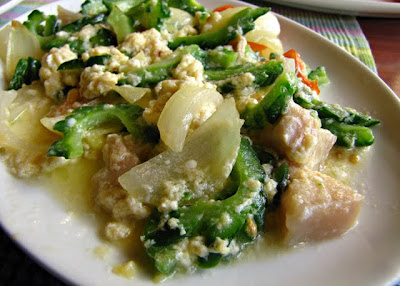 for now, i'll be content with rediscovering an old treasure...

Popular posts from this blog

in any case, since i am slightly obsessed with food, i am posting some of the food pics i got from my most recent trip to bacolod. pasensya if after you go through this post you feel any slight rumbling in the pit of your stomach. any indecent threats posted in my comments section will be dealt with slightly este severely.

deep fried soft shell crab on top of linquine with a sauce made from chopped mussel ala aoili (garlic dearie). verdict? the soft shell crab is not fresh or they used stale frying oil. to save the taste i requested for olive oil, a bit of chili flakes and parmesan - pasta alfredo, balay 21, lacson st. bacolod city.

one of the most popular post in this blog is cebuanas.com. for some reason, when someone does a search on the web for "cebuanas.com scam" they end up in my website.

i guess my write up about their special romance package caused such a ruckus that they took it out of their website. i felt like doing a sherlock holmes and decided to visit the site to pose as a customer. here's a snapshot of my interesting, grammatically challenged conversation with kai:

that's not all, in the course of my "investigation" i stumbled across some literary gems of advice for the foreigner interested in looking for a wife:

WHY FILIPINA SEEK A FOREIGN HUSBAND?

Filipinas seek a foreign husband because…