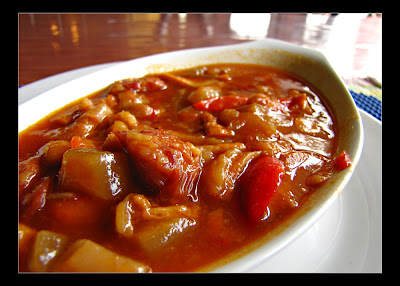 most places are closed the day before christmas or new year. with little options, i took a chance that mama gie was open on the 24th - one, to get some lunch and two, order palabok for take out. the kitchen gods must have been listening as we arrived to a busy crew preparing orders and orders of pre-ordered palabok.

i was tempted to order the pinakbet for lunch considering that in my previous visit, it easily stood out as my favorite. nevertheless, in pursuit of (re)discovering more of mama gie's dishes, i decided to order the embutido and paired it with an order of callos.

callos is a tricky thing as i have a tendency to compare it with the way my mama palangging would cook hers. the soft velvety texture of ox tripe and pata boiled for hours to get the heavy, sticky, meat flavored stock then simmered in a rich tomato sauce with the smoky flavor of bell peppers is something that automatically transports me to my mom's kitchen and the nightly dinner with siblings that usually turn to a free for all as we position, maneuver and outbox each other for prime portions.

coincidentally, mama customized the recipe to suit our taste, adding potatoes, carrots, chickpeas and chinese sausage instead of the standard chorizo bilbao. it was much later that i found out that olive oil would have been the preferred choice in cooking the dish with chorizo bilbao to get the strong flavors of paprika.

that aside, i think the most authentic (and savory) callos would be the arano's version where you don't see any of the ingredients except for the meat stewing in tomato sauce. then again, i would say mama palangging's version is still the best.

with such history behind it, i'm usually curious when the menu carries callos as part of the offering and i never fail to order that at one point. in this case, mama gie's callos is good, not exactly the spectacular savory experience i was looking for, it lacked that heavy meat flavor, the sauce wasn't as creamy and thick as i imagined it to be. for less than a hundred per serving, i would say it is good value for money.

the embutido is another dish that easily stands out as a favorite and frequently ordered request by mama's friends. the classic embutido is the pinoy steamed meatroll and is a tedious dish that it usually gets prepared only on special occasions in the house. 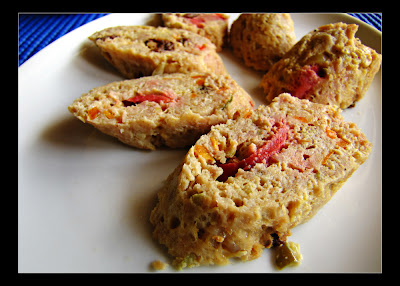 the classic embutido does not use foil as a wrapper but uses "sinsal" or a glutinous pork entrail that is carefully cleaned, scrubbed and spread out like a mat on top of a wet cheesecloth. imagine the japanese method of rolling sushi, that is very much the same method of how to form embutido.

my mom's embutido has cheese, raisins and red colored hotdog as the core of the meatroll which gives it that oddly reddish streak when it is cut for serving. fried or served cold, it is something that makes me think back and say... damn, so that's how i got so fat as a kid.

fast forward to the present and i got served a pale version of the embutido in mama gie. i can see pickles, carrots, strips of ham, no cheese, raisins and the meat is not as thickly packed as i wanted. then again, for a six inch roll with a 1.5 inch diameter and priced at Php 60 pesos i would say that value for money, this one's a good buy. taste wise, the rating would still be a "good", nothing spectacular, but definitely a keeper in my list.

overall, mama gie is still a good place where you can bring friends and family for a simple home cooked experience that is not too grand, but with enough character to keep you coming back for seconds. 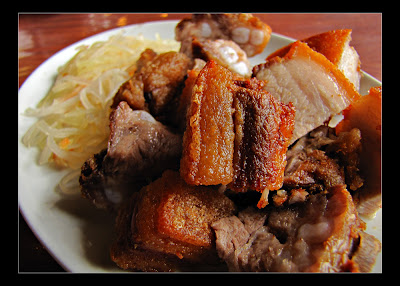 and oh... don't forget to order the lechon kawali. artery clogging, sinful and totally fatty. you gotta love it or hate it. me? love it, calories be damned. 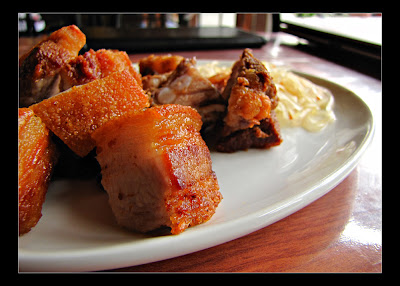 disclaimer, i technically DIDN'T order this dish. tata served us this when we got to talk about lechon kawali recipes ha ha ha. i so totally believe her when she said that it is practically a best seller and a hit with the kids :)

Diane Veloso Blanco said…
both my parents studied in velez, they had very good things to say about mama gie also, but when we went i was disappointed cause the pancit palabok was bland, and the kare-kare was ummm not yummy. at all. :| but then, with those prices i guess that's good na.
8:37 PM

Cacho said…
you absolutely nailed it amiga! i didn't really like the kare kare and i thought that the palabok was a bit bland. like i said in my previous post, jollibee's version tasted much better :) - value for money though, i'd say that the place is good enough considering the prices :)
6:28 PM

Popular posts from this blog

in any case, since i am slightly obsessed with food, i am posting some of the food pics i got from my most recent trip to bacolod. pasensya if after you go through this post you feel any slight rumbling in the pit of your stomach. any indecent threats posted in my comments section will be dealt with slightly este severely.

deep fried soft shell crab on top of linquine with a sauce made from chopped mussel ala aoili (garlic dearie). verdict? the soft shell crab is not fresh or they used stale frying oil. to save the taste i requested for olive oil, a bit of chili flakes and parmesan - pasta alfredo, balay 21, lacson st. bacolod city.

one of the most popular post in this blog is cebuanas.com. for some reason, when someone does a search on the web for "cebuanas.com scam" they end up in my website.

i guess my write up about their special romance package caused such a ruckus that they took it out of their website. i felt like doing a sherlock holmes and decided to visit the site to pose as a customer. here's a snapshot of my interesting, grammatically challenged conversation with kai:

that's not all, in the course of my "investigation" i stumbled across some literary gems of advice for the foreigner interested in looking for a wife:

WHY FILIPINA SEEK A FOREIGN HUSBAND?

Filipinas seek a foreign husband because…